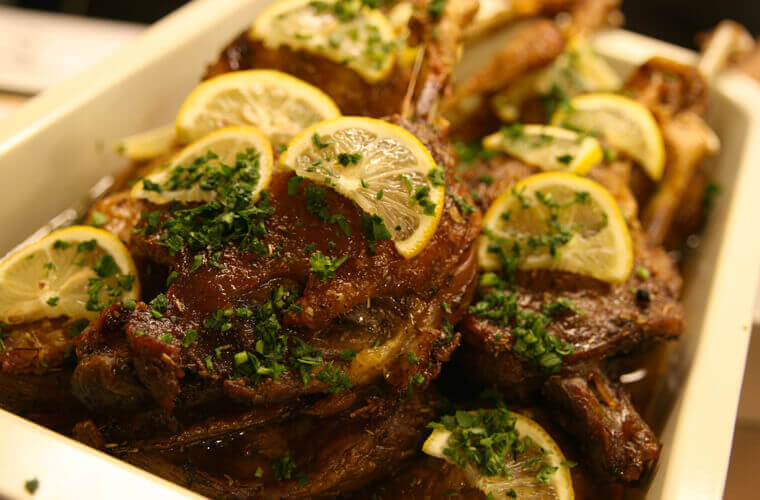 Quality street food is really easy to find in Budapest, especially if we help you find the right places in the city. Food on the go is all around you, but in order to find the best street food, let’s first talk a little about what quality street food means to the locals.

Traditional Hungarian food is all about meat, so if you’re in the mood to explore the world of sausage, here’s a handy guide: the simplest (and to many locals, best) version is sült kolbász (Bratwurst or grilled sausage). A slightly more sophisticated variation (just as popular) would be hurka – boiled sausage. Hurka comes in two varieties: májas (liver sausage) or véres (blood sausage). The main ingredients are liver or blood plus rice and spices. When done right, these immediately conjure up the country pig killings where they are traditionally made.

Where to get it #1: Disznótoros

If you’re down for great food in a self-service, school canteen-esque atmosphere, you picked the right place! You order your meats at the counter, wait for them to cook it for you, then get your sides (get PICKLES!) and pay. The place is called the meat lover’s paradise for a reason (their motto: “smuggle a little rural gastronomy into the hustle and bustle of Budapest”), their sausages and pork roast are beyond comparison. Pro tip: Mangalica! We wrote a whole post about the Hungarian hairy pig earlier. 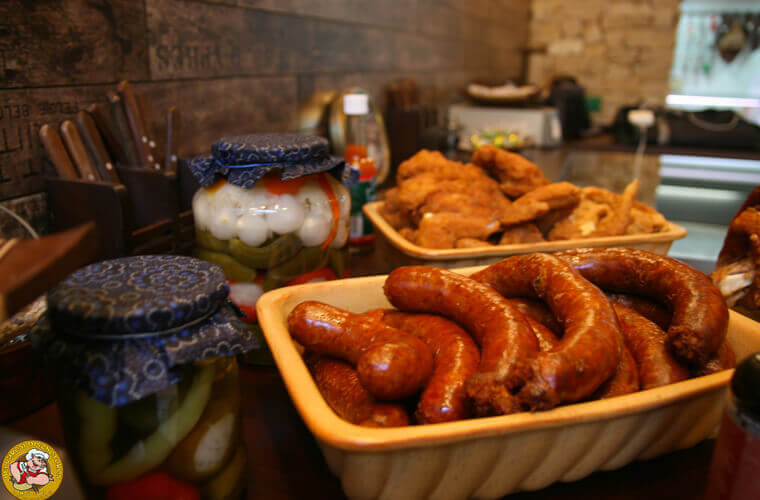 Where to get it #2: Food market Budapest

Hentes (aka butcher) shops at any decent Budapest markets. This could be the Hold utca market, the Central Market Hall by Szabadság bridge, or the Fény utca piac (market) on the Buda side. (Many more smaller places are also just as good, just ask the Maverick staff for tips!) These are the places locals would go sausage/hurka shopping, so vendors may or may not speak English – which adds such a native tinge to this dive experience! Markets are also the best place for grocery shopping, especially if you don’t like the gigantic and bland international chains overtaking everything else.

All in one place: Karaván

If you want to explore the best street food to try in Budapest, Karaván is the place to go. The best thing about the Budapest street food Karaván has is convenience: it is right in the center, close to Maverick City Lodge, in Kazinczy street (aka the heart of the party district). It really is the Budapest street food market with various stalls with amazing selections. Burgers, pizza, pasta and all the street food Budapest has awaits you, but to stay local, try these, in Karavan or at street stalls around the city:

(Kürtőskalács) specialties – the Hungarian sweet street food. The traditional version comes with cinnamon, but sellers have tons of new ideas, too. 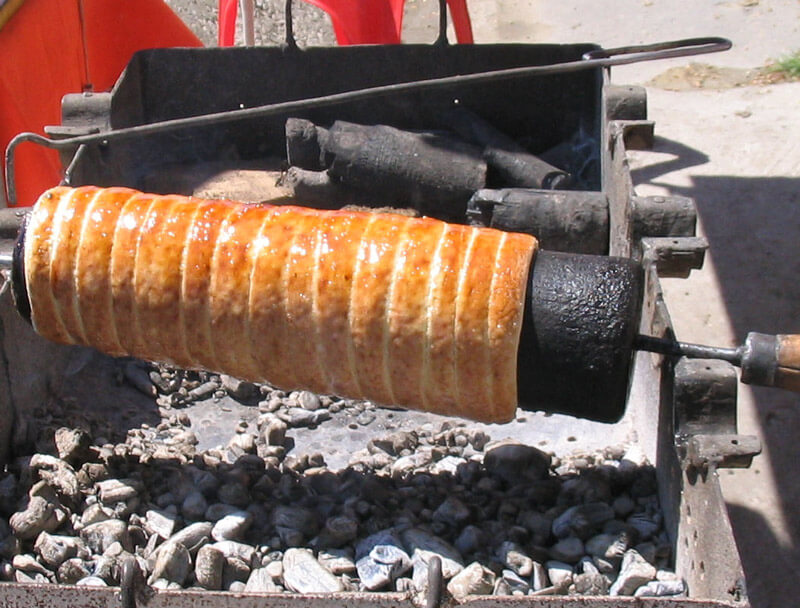 (Or ‘flame cake’) – potato-based dough fried in FAT. Believe it or not, this is the traditional beach food for locals, who love to devour it with garlic, sour cream and cheese. Bon appétit! 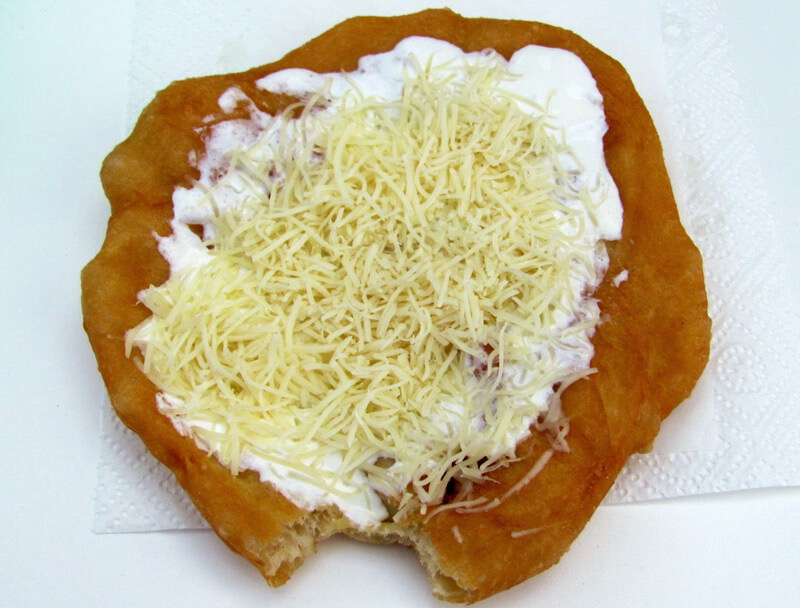 The Hungarian stew-like staple (creamier than a simple soup, often with meatballs). For a freshly cooked and healthy version, we recommend Hokedli in 10 Nagymező utca. (The most traditional varieties are made of spinach, tomato and cabbage, or potato – but it’s a great place to explore new ideas!) Also, fish! Which is generally harder to find in Hungary than many other countries. But Halkakas, which is not your traditional fast food place, does serve good Hungarian fish fairly fast. (In Dohány utca, halfway between Astoria and Blaha). 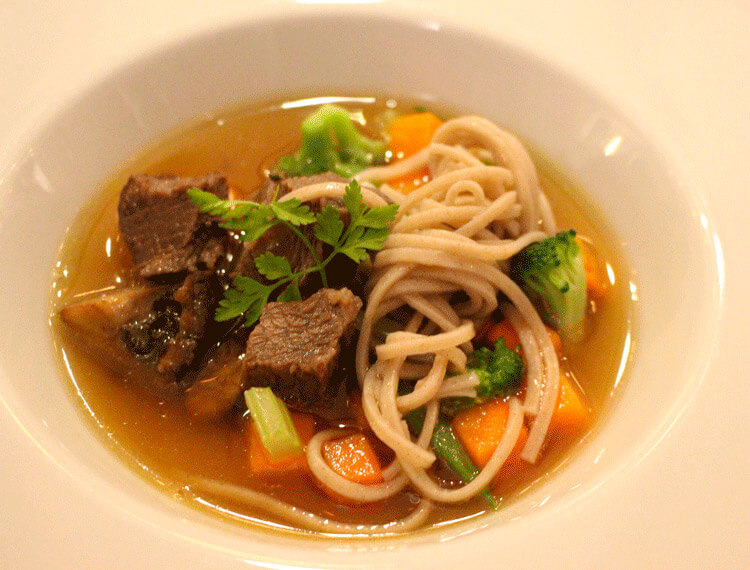 If you want something quick, but still more than street food in Budapest, we can recommend a bunch of great places: Bors Bistro (10 Kazinczy utca) offers great soups and sandwiches, also some amazing desserts. At the Hummus bar (many locations all around town), you can get a really filling sandwich on the go or you can sit down for a nice Middle-Eastern meal. You might also want to stop by Róma ételbár (20 Csalogány utca – on the Buda side) or Central Canteen right next to Maverick City Lodge. On Sundays, you can also visit the Szimpla kert farmers market in Kazinczy utca. For even more, make sure you read our post on the best restaurants in Budapest!