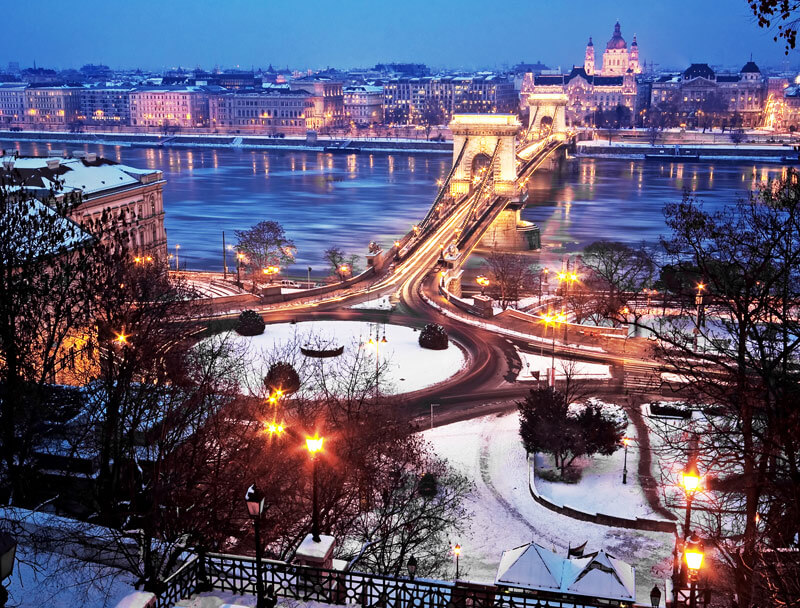 Budapest has become a special destination for spending the Christmas season. The city is adorned with lights and Christmas decorations that give new life to the buildings and avenues full of snow. In addition to seeing the lights and decorations, there are many things to do in Budapest at Christmas time, from skating rinks, to outdoor spas, to concerts, or to Christmas markets.

In this post we are going to give you information about the best Christmas markets in Budapest and the essential things you have to do at Christmas in Budapest. 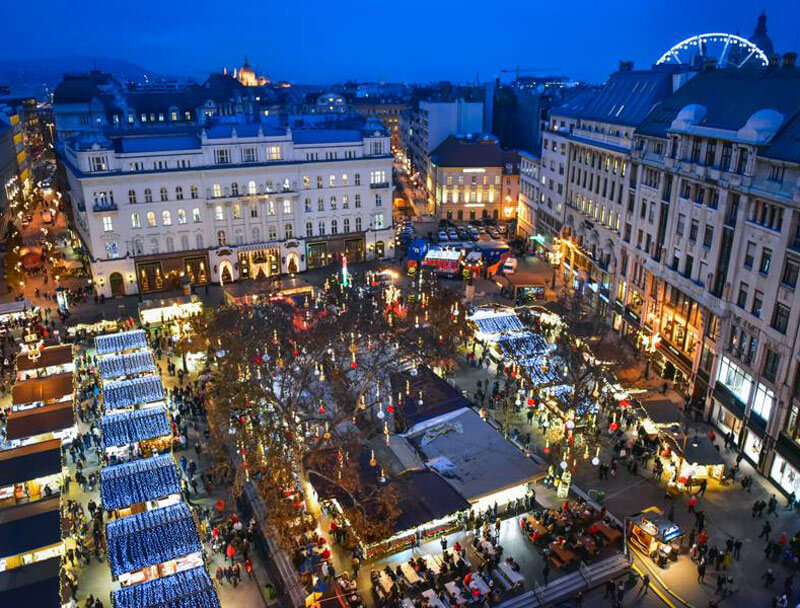 Budapest advent: What to do at Christmas in Budapest in 2022

It is quite an experience to be submerged in 38-degree waters while it snows around you. Forgot your swimsuit? No problem! They are sold in the same place, and towels can be rented. However, we do recommend that you bring your own towels, because the queues for collecting the deposit are long.

This skating rink is located very close to the Széchenyi baths, so you can go ice skating and then soak up the bath. It is one of the oldest and largest ice skating rinks in Europe, in a beautiful location where you can take great pictures. Even more, you can find the Hungarian Hockey Museum, skate rentals, and ice skating lessons in the track building.

Go see the Nutcracker at the Opera House

This famous Tchaikovski ballet has become a tradition in the Hungarian capital. Best of all is its price: Less than 40 Euro per person!

Travel on one of the trams decorated with Christmas lights

Contrary to what you might think, the ticket costs the same as a normal bus ticket. These trams can be taken at any of their stops along the bank of the Danube in one of the most beautiful areas of Budapest. They are operational from the beginning of December until the end of Christmas. 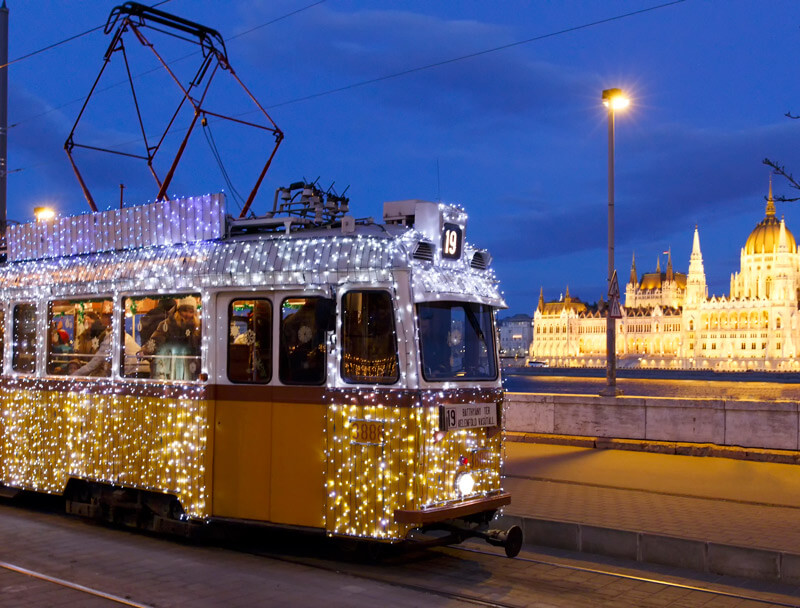 Enjoy the Budapest Christmas markets in 2022

If you decide to travel to Budapest at Christmas time, you must visit some Christmas markets. Luckily for you, we have collected information and advice on the two best winter markets and festivals in Budapest.

General tips: at any 2022 Christmas market in Budapest, all the products sold at Christmas stalls and the food are artisan-made. Therefore, it is generally a little more expensive than the rest of the city’s products (since these are higher-quality). 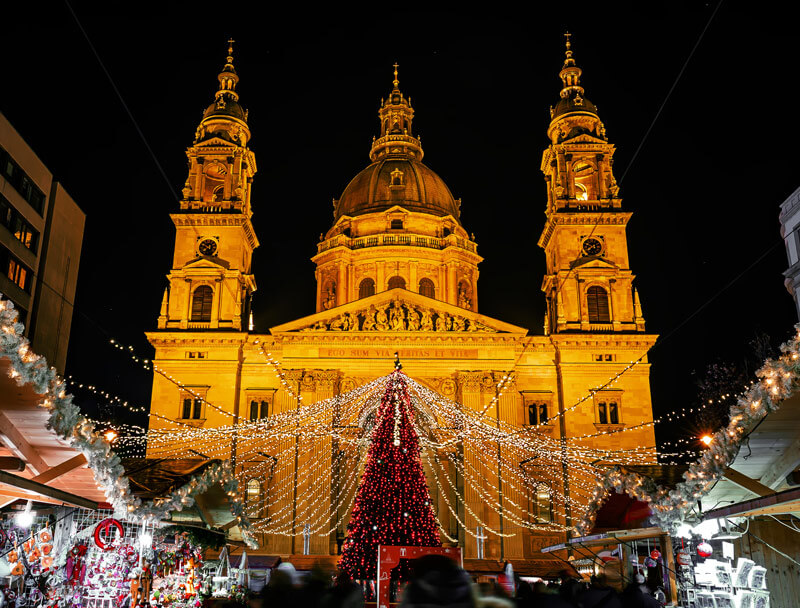 Located in the square of Vörösmarty, this market is one of the essential Christmas in Budapest. If you want to enjoy a typical Christmas time atmosphere - with the scent of fir trees, mulled wine, cinnamon, and Christmas tree cookies: this market is for you. The winter festival in Vörösmarty tér celebrates 24 years in this 2022 from its first edition, and every year exceeds the previous one in terms of size and activities. 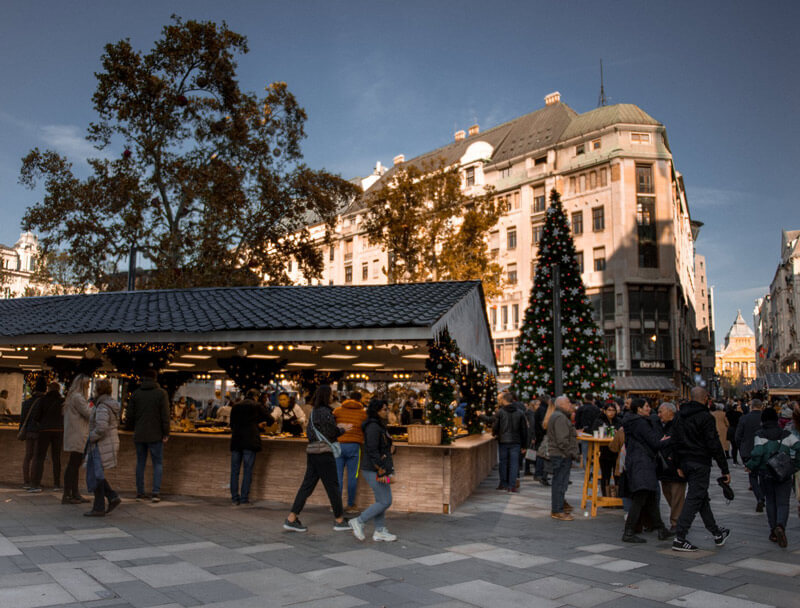 Maverick's Budapest accommodation staff recommends that you try out at least one of the traditional local delicacies: roasted chestnuts, plum juice with cinnamon, hot chocolate, mulled wine, spit cake (kürtőskalács - with cinnamon or even Nutella), lángos, Sekler Cake, Strudels, Flódni (a traditional Jewish cake with layers of walnut, poppy seeds, and stuffed with plum jam) or bread pizza baked in a clay oven. For meat lovers, we suggest a very special speciality: the Mangalica Burger, made from the only breed of hairy pig in the world, the Hungarian Mangalica.

It can be tricky, as there is a Vörösmarty tér (square) and a Vörösmarty utca (street) in the downtown, both on the millennial subway line M1 (yes, still the very first metro line on the European continent!).

Vörösmarty tér (square) is where most important things happen – the street is in a nice neighborhood, but really nothing to write home about. They were both named after the same 19th century poet. Vörösmarty square, where the market takes place, is the downtown end station of M1; this is where overpriced Váci utca, or the Budapest fashion street begins, and it is a stone’s throw from the Danube and the Buda hills across the river.

It is considered the prettiest Christmas market in Budapest, despite being smaller than Vörösmarty tér. This Christmas market has a 200-square-metre ice skating rink and a huge Christmas tree in the centre of the square: the perfect place to take some spectacular photos with the basilica in the background. Apart from this, what is special about this market? The 3D projection light show displayed on the façade of St. Stephen's Basilica. This show takes place every day from 5:30p.m. to 8:00p.m. at half-hour intervals. In recent years, there are two types of alternating light shows: one “traditional” kind and another one in 3D, to watch with 3D glasses, available at any store in the market.

If you go to this Christmas market, you can also enjoy the artisan gift stalls and street food on Zrínyi and Sas Streets (sandwiches, pancakes, soups, lángos, and Christmas sweets).

What to do after visiting the 2022 Christmas markets in Budapest

If you came on foot, take a quick look at the M1 line of the millennial metro (It is one of the 25 Budapest attractions): It is a late nineteenth century fantasy! Later, you can walk to the Danube to the west - both the Vörösmarty Christmas market and St. Stephen’s Basilica are minutes away from the Danube. You can choose between crossing Erzsébet híd or Lánchíd (Elisabeth Bridge or Chain Bridge) to the Buda hills, the romantic Gellért Hill, or the charming Castle District. 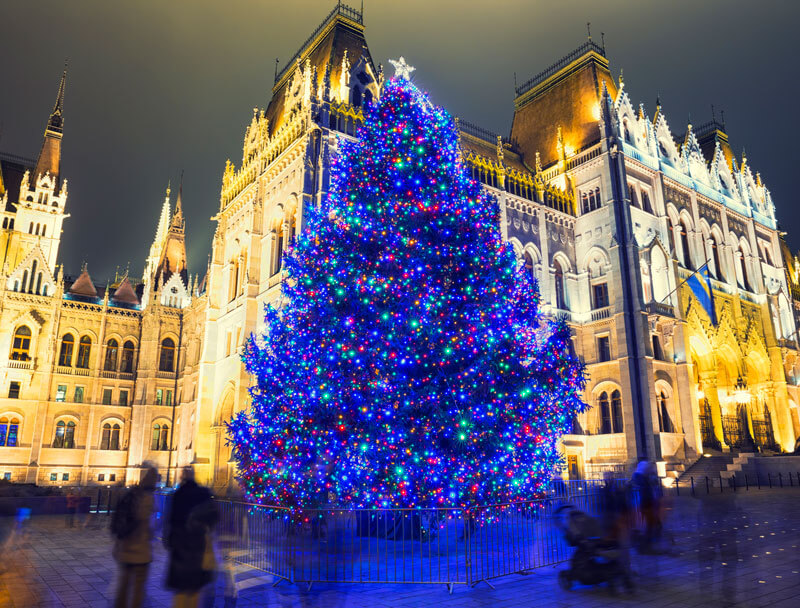 As we said, Budapest at Christmas time is especially beautiful. Everywhere you go will be decorated. If you prefer to stay on the Pest side, you can stroll through the Shoes on the Danube Bank, one of the most moving Holocaust memorials in the world (the shoes on the steps of the bank commemorate the Jewish residents of Budapest who were killed and thrown into the river by the Nazis).